An Evening of Lived Experience on the Harms of Institutionalizing Youth. 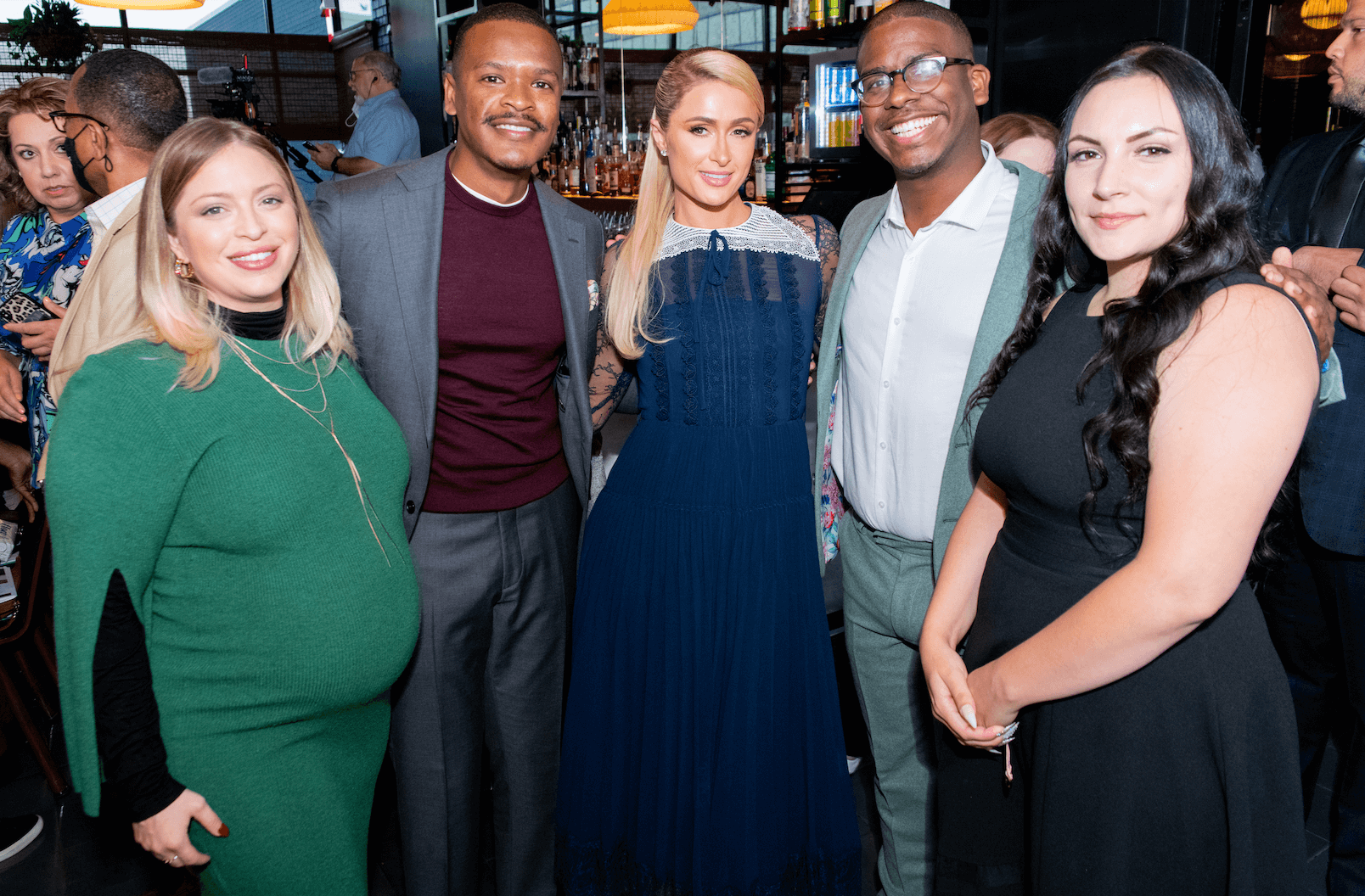 Across the country, too many young people are institutionalized in foster care group homes, juvenile justice settings, youth prisons, boot camps, behavior modification centers, boarding schools, and more. Though all of these institutions have important differences and nuances, they share something important: young people who have experienced these settings are speaking out loudly against the abuse and harm that youth institutions can cause.

On Wednesday October 20th, at the Eaton Hotel in Washington, DC, Think of Us hosted An Evening of Lived Experience on the Harms of Institutionalizing Youth alongside Paris Hilton and Breaking Code Silence. This evening featured leaders of different movements that share a common goal:  ending unnecessary youth institutionalization.

When Think of Us published Away From Home this summer, we shared the stories and experiences of 78 young people who had been institutionalized in foster care.  In this study, we heard stories of foster youth who experienced abuse or neglect while in the institutions, who were not able to participate in normal, age-appropriate activities, and whose relationships were highly surveilled.

What we found is that these stories are often eerily similar to the stories of survivors of for-profit residential treatment centers—often known as the Troubled Teen Industry.  In 2019, Paris Hilton began speaking out about her own experiences of abuse and trauma when she was institutionalized as a teenager. Since then, Paris and Breaking Code Silence have teamed up to raise the alarm about the harms of for-profit residential treatment centers. Leaders in this movement expose how many of these for-profit institutions are unregulated, and how youth there sometimes experience extreme abuse including solitary confinement, sexual abuse, forced isolation, prolonged silence, forced feeding, and more.

“My family had no idea. It’s the same thing with every family. No parent would ever send their children to a place like this if they knew what happened behind closed doors.” -Paris Hilton

Paris Hilton and Sixto Cancel open the discussion around the unnecessary institutionalization of youth.

People With Lived Experience Speak Out

Think of Us, Paris Hilton, and Breaking Code Silence gathered policy makers and other leaders in Washington, DC to hear directly from survivors of these placements. At this event, those with lived experience got the floor—and the mic.

Steve Clemons of The Hill moderated the event, opening the evening with a reading from Away From Home.

Then came a screening of a clip of This is Paris, Paris Hilton’s documentary where she shares about the nightmares she experienced during institutionalization.  This described the violent, scary way she was removed from her home, her many attempts to run away from institutions, and the legacy that trauma still has on her physical and mental health today.

Paris Hilton and Sixto Cancel discussed what the Troubled Teen Industry and foster care group settings have in common.  They also spoke about the important differences between these sectors, including how foster care disproportionately impacts Black youth and other youth of color, and poor families, with Sixto noting that 58% of Black families will have a child welfare investigation at some point in their life.

“There’s a big problem because there might be a shortage or a perceived shortage of foster homes in a state, then they’re over utilizing facilities. So what you just heard was not a diagnosis, which is why we’re taking this teenager and putting them in a facility. It’s because the system has actually failed to have enough licensed homes...What we see is that once young people are...in the system or in these group homes, they sometimes don’t leave until they age out.” -Sixto Cancel

Next, Bobbi Taylor, Caroline Cole, and Alain Datcher—who all have lived experience in one or more forms of youth institutions—joined Paris and Sixto on stage in conversation.  Together, this panel spoke of the day-to-day experiences in institutions.

“I actually entered care through juvenile justice...and my primary offense...was not going to school... That was at the age of 12...From 12 to 19 I would go from placement to placement to placement. They even tried to send me home a few times but...they found out they were actually sending me home to my abuser and so from that point forward, I was considered a foster youth, but I never went home and I never went to a foster placement. At 17, there was a point that I was so tired of...being deprived of my freedom and deprived of normalcy, I would run away and...when I ran away from the highest level of care in Nebraska, I was arrested six months later and...taken to the county jail. For seven months I lived in the county jail and there was not one aspect of that facility that I had not already experienced through juvenile justice or foster care or any of the congregate placements that I had been in...It’s really ironic that the very system that they are trying to prevent us from going into is actually the system that they’re conditioning us for since the first day that we entered care.” - Bobbi Taylor

“Both of my parents struggled with substance abuse. I entered the foster care system at age 11, almost 12. I remember the evening...it was both police and social workers together coming to remove myself and my siblings from our parents home. At the time, my mother was in prison and so my father was our primary caregiver...The first...days of going to a facility called MacLaren Hall...it was widespread for abuse and neglect of children...I remember being there the first night...it was like a prison...I was separated from my siblings by age...I didn’t see them the entire time I was there...I remember vividly the pale blue uniform that they gave me. I remember lunch time. I remember play time. It was a really sad and really difficult situation. I remember just thinking, ‘What did I do to be here? I want to see my brothers. Get me out of here.’ They allowed us one call per week and so I was able to call my sister and I just remember just breaking down and saying, ‘Please come get me...Please come get us out of here by any means.’” -Alain Datcher

Paris Hilton and Breaking Code Silence are advocating for a bill of rights for all youth in any congregate settings and stronger regulation.  Sixto made it clear that Think of Us wants more than reform or regulation.

“I am calling for an end to unnecessary institutionalization of foster youth.” - Sixto Cancel‍

The panelists painted a picture of what a better world would look like - that children belong in families, prioritization of kinship placement, improved access to mental health support for foster youth, and streamlined coaching and support for kinship and traditional foster families.

“What young people need is family and love and to be loved past a contractual agreement.” - Sixto Cancel

“We have to address the myth of…’bad kids, bad parents, this is the only way’... the myth of ‘Well, we have to institutionalize kids that are abused or neglected or unwanted’...We’ve literally allowed young people to fend for themselves in these systems out of sight, out of mind.” -Alain Datcher

“We don’t have time to be quiet because there are so many young people that are currently in the system that are waiting for us to be the change that they are hoping for.” -Bobbi Taylor

“Equity within a broken system isn't the answer. Existing systems traumatize families and they continue a legacy of discrimination and we have to work to dismantle that.”
-Sandra Gasca-Gonzalez

Sandra announced that 22 states in the U.S. have committed to dramatically reduce or eliminate group care in child welfare, and AECF and Casey Family Programs will work in partnership to help states make this reality.

Finally, Vanessa Hughes of Breaking Code Silence shared her bold vision of reform for the Troubled Teen Industry, including hopes to pass the Accountability for Congregate Care Act bill in Congress.

In the reception following the event, guests walked through a gallery of the poems, art, and photographs in Away From Home—all by foster youth who have experienced institutionalization.  You can see that artwork yourself at Think of Us’ brand new Digital Youth Museum.

You Can Learn More

An Evening of Lived Experience on the Harms of Institutionalizing Youth was streamed live and recorded.  If you missed it, you can watch the full recording of the event.

That night, all guests received a copy of the Away From Home book. If you’d like to, you can purchase a physical copy of the book, or read the virtual book for free.

Visit the Away From Home Page

When I first read the Away From Home report, I felt my current mission with North Carolina’s youth take on new dimensions; I felt my sense of urgency be redefined.

We See You, We Hear You, And Your Feelings Are Valid.